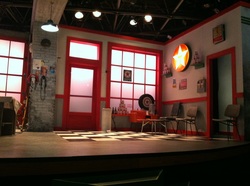 So do you want to take a trip down memory lane? Well here’s your chance. You have to watch this really hip show at the Copley Theater. No squares allowed. It’s in downtown Aurora. This is a cool “jukebox spectacular” called, “Route 66,” It features a lot of slick songs from the 50’s and 60’s about being on the road. So open up your imagination, sit back, relax and let’s go for a ride.

There are several opportunities to watch this musical. Four times a week, between April 11 and June 10, you can be a part of this lively entertaining experience at this intimate theater.

The lights, sounds and elaborate scenery are quite stunning. Bright colors are glowing from the Texaco neon light. It’s those little details, like oil cans, bottle of soda, coca-cola signs, pinups hung on the walls and the checkerboard tile floor, that suck you into the gas station world. Garage doors actually rise, revealing the fully functioning musicians and props. I love the typical waiting room arrangement with risky magazines. It’s those kinds of stage props that can excite the spectators.

“Route 66” is a musical extravaganza about these Texaco service station attendants who begin to daydream about the journey from Chicago-to-Los Angeles on the ultimate road trip with great live music, dancing and highway monkey business.

This garage band, they form, begins in Chicago with the sounds of the 1950s rockabilly tunes and as they head to the California coast, the surf music of the 1960s kicks in. They jam to over 30 songs including, “King of the Road,” “I Get Around,” and “On The Road Again.”

The show is directed and choreographed by Stacey Flaster, with music direction by Alan Bukowiecki. Scenery for this production was built by the Paramount Scene Shop managed by Jason Pikscher.

Variety Show, for me, is the strongest way to describe this event. It goes from one hit song to the next with a general theme. It is completely character-driven; so there is no actual story. A jukebox revue has many different song composers in it. What ties it all together it is traveling on Route 66.

The gas station guys are singing about being on the road. They sing about driving slick cars, drinking it up at the bars, checking out the hot girls and crashing at the motels. The orchestration for the show comes entirely from the actors themselves. There’s a standby drummer and a bass player in warn out gas station uniforms. The other 6 gas station mechanics (in full getup complete with oil stains and grimy/greasy hair) also moonlight as various guitar players, saxophonists, piano players and stunning singers that rock out like Chuck Berry, Jerry Lee Lewis and even Blues Brothers styles.

If you want to jam with a garage band then take your own road trip to downtown Aurora and “Get your kicks on Route 66.”