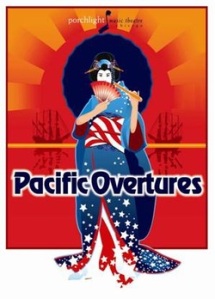 Porchlight Music Theatre and artistic director, Walter Stearns should be very proud of their most recent production. I am talking about Pacific Overtures. This is an exotic musical story of the painful westernization of Japan, beginning in the 1850’s and leading up to present day. I was there for press opening on Wednesday, March 18 at 7:30 pm. This show is a work of art with an effectively memorable score and colorful characters that were unforgettable. The show features characters such as shoguns, fishermen, and geisha. Also, it mixes elements of traditional Japanese theatre with Broadway.

What was pretty amazing about the cast of Pacific Overtures was that they were all Asian-Americans. Broadway actor, David Rhee gives a very dramatic performance of the Reciter, especially in the opening few minutes. I practically jumped from my seat because he was so intense and expressive. There are some other real treasures in this cast, including Keith Uchima’s moving and emotionally powerful work in a number entitled, “Someone in a Tree.” It was so imaginatively beautiful that I wanted to hear it several times in a row. The moment I most enjoyed Wednesday night was “A Bowler Hat,” performed by a youthful actor named Danny Bernardo. It captured paradox in this advisory tale about the dangers of compromising yourself before you know the full scope of historical change.

The atmosphere on this intimate stage setting was created with Kurt Sharp’s sliding door set, which seemed to resemble traditional Japanese rice screens. John Horan masterfully illuminated the fine lighting. The players were dressed in gorgeous Japanese Kimonos with authentic wigs and they glided across the playhouse with Kabuki movements and Noh theatre elements. A strongly Oriental influenced score is immaculately played by an extraordinary 5 piece orchestra. The singing was brilliant and the movements and Samurai fighting were top notch.

Pacific Overtures is a history lesson filled with suspense, comedy, beauty, and poetry. Hurry over to 1225 West Belmont before it ends on May 2nd. You will be astonished!